The gt package is all about making it simple to produce nice-looking display tables. Display tables? Well yes, we are trying to distinguish between data tables (e.g., tibbles, data.frames, etc.) and those tables you’d find in a web page, a journal article, or in a magazine. Such tables can likewise be called presentation tables, summary tables, or just tables really. Here are some examples, ripped straight from the web: 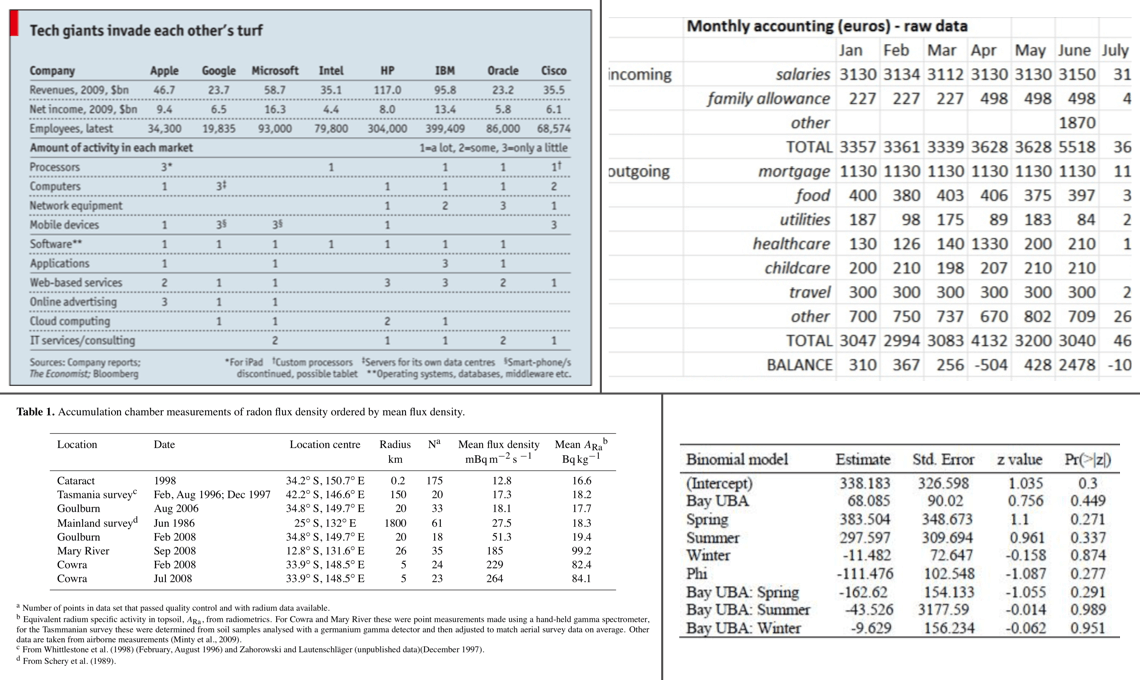 We can think of display tables as output only, where we’d not want to use them as input ever again. Other features include annotations, table element styling, and text transformations that serve to communicate the subject matter more clearly.

A Walkthrough of the gt Basics with a Simple Table

Let’s use a less common dataset that is available in the R datasets package: islands. It’s actually not a data frame but a named vector. That’s okay though, we can use use dplyr and prepare a tibble from it:

Given that islands_tbl is a tibble, we now have a suitable input for gt.

The main entry point into the gt API is the gt() function. If we pass islands_tbl to the function gt(), we’ll get a gt Table as output. As an aside, we could have easily used a data frame instead as valid Table Data for gt.

That doesn’t look too bad. Sure, it’s basic but we really didn’t really ask for much. We did receive a proper table with column labels and the data. Also, that default striping is a nice touch. Oftentimes however, you’ll want a bit more: a Table header, a Stub, and sometimes footnotes and source notes in the Table Footer part.

Adding Parts to this Simple Table

The gt package makes it relatively easy to add parts so that the resulting gt Table better conveys the information you want to present. These table parts work well together and there the possible variations in arrangement can handle most tabular presentation needs. The previous gt Table demonstrated had only two parts, the Column Labels and the Table Body. The next few examples will show all of the other table parts that are available.

This is the way the main parts of a table (and their subparts) fit together:

The parts (roughly from top to bottom) are:

The way that we add parts like the Table Header and footnotes in the Table Footer is to use the tab_*() family of functions. A Table Header is easy to add so let’s see how the previous table looks with a title and a subtitle. We can add this part using the tab_header() function:

The Header table part provides an opportunity to describe the data that’s presented. The subtitle, which functions as a subtitle, is an optional part of the Header. We may also style the title and subtitle using Markdown! We do this by wrapping the values passed to title or subtitle with the md() function. Here is an example with the table data truncated for brevity:

A source note can be added to the table’s footer through use of the tab_source_note() function. It works in the same way as tab_header() (it also allows for Markdown inputs) except it can be called multiple times—each invocation results in the addition of a source note.

Footnotes live inside the Footer part and their footnote marks are attached to cell data. Footnotes are added with the tab_footnote() function. The helper function cells_body() can be used with the location argument to specify which data cells should be the target of the footnote. The cells_body() helper has the two arguments columns and rows. For each of these, we can supply (1) a vector of colnames or rownames, (2) a vector of column/row indices, (3) bare column names wrapped in c() or row labels within c(), or (4) a select helper function (starts_with(), ends_with(), contains(), matches(), one_of(), and everything()). For rows specifically, we can use a conditional statement with column names as variables (e.g., size > 15000).

Here is a simple example on how a footnotes can be added to a table cell. Let’s add a footnote that references the North America and South America cells in the name column:

Here is a slightly more complex example of adding footnotes that use expressions in rows to help target cells in a column by the underlying data in islands_tbl. First, a set of dplyr statements obtains the name of the ‘island’ by largest landmass. This is assigned to the largest object and is used in the first tab_footnote() call that targets the cell in the size column that is next to a name value that is stored in largest (‘Asia’). The second tab_footnote() is similar except we are supplying a conditional statement that gets the lowest population.

We were able to supply the reference locations in the table by using the cells_body() helper function and supplying the necessary targeting through the columns and rows arguments. Other cells_*() functions have similar interfaces and they allow us to target cells in different parts of the table.

The Stub is the area to the left in a table that contains row labels, and may contain row group labels, and summary labels. Those subparts can be grouped in a sequence of row groups. The Stub Head provides a location for a label that describes the Stub. The Stub is optional since there are cases where a Stub wouldn’t be useful (e.g., the display tables presented above were just fine without a Stub).

An easy way to generate a Stub part is by specifying a stub column in the gt() function with the rowname_col argument. This will signal to gt that the named column should be used as the stub, making row labels. Let’s add a stub with our islands_tbl dataset by modifying the call to gt():

Notice that the landmass names are off the the left in an unstriped area? That’s the stub. We can apply what’s known as a stubhead label. This label can be added with the tab_stubhead() function:

A very important thing to note here is that the table now has one column. Before, when there was no stub, two columns were present (with column labels name and size) but now column number 1 (the only column) is size.

To apply our table parts as before (up to and including the footnotes) we use the following statements:

Let’s incorporate row groups into the display table. This divides rows into groups, creating row groups, and results in a display of a row group labels right above the each group. This can be easily done with a table containing row labels. We can make a new row group with each call of the tab_row_group() function. The inputs are row group names in the label argument, and row references in the rows argument. We can use any of the strategies to reference rows as we did we footnotes (e.g., vectors of names/indices, select helpers, etc.).

Here we will create three row groups (with row group labels continent, country, and subregion) to have a grouping of rows.

Three row groups have been made since there are three unique categories under groupname. Across the top of each row group is the row group label contained in a separate row (these cut across the field and they contain nothing but the row group label). A rearrangement of rows is carried out to ensure each of the rows is collected within the appropriate row groups.

Having groups of rows in row groups is a great way to present information. Including data summaries particular to each group is a natural extension of this idea. This process of adding summary rows with summary labels is covered in a separate article (Creating Summary Lines).

Another way to make row groups is to have a column of group names present in the input data table. For our above example with islands_tbl, having a groupname column with the categories continent, country, and subregion in the appropriate rows would produce row groups when using the gt() function’s groupname_col argument (e.g., gt(islands_tbl, rowname_col = "name", groupname_col = "groupname") %>% ...). Then, there would be no need to use the tab_row_group() statements. This strategy of supplying group names in a column can sometimes be advantageous since we can rely on functions such as those available in dplyr to generate the categories (e.g., using case_when() or if_else()).

The table’s Column Labels part contains, at a minimum, columns and their column labels. The last example had a single column: size. Just as in the Stub, we can create groupings called spanner columns that encompass one or more columns.

To better demonstrate how Column Labels work and are displayed, let’s use an input data table with more columns. In this case, that input table will be airquality. It has the following columns:

We know that all measurements took place in 1973, so a year column will be added to the dataset before it is passed to gt().

We can do two more things to make this presentable:

Let’s do both of these things in the next example.

Note that even though columns were moved using cols_move_to_start(), the spanner column labels still spanned above the correct column labels. There are a number of functions that gt provides to move columns, including cols_move(), cols_move_to_end(); there’s even a function to hide columns: cols_hide().

Multiple columns can be renamed in a single use of cols_label(). Further to this, the helper functions md() and html() can be used to create column labels with additional styling. In the above example, we provided column labels as HTML so that we can insert linebreaks with <br>, insert a superscripted 2 (with <sup>2</sup>), and insert a degree symbol as an HTML entity (&deg;).