The gt package comes with six built-in datasets for experimenting with the gt API: countrypops, sza, gtcars, sp500, pizzaplace, and exibble. While each dataset has different subject matter, all of them will be used to develop gt examples with consistent syntax. 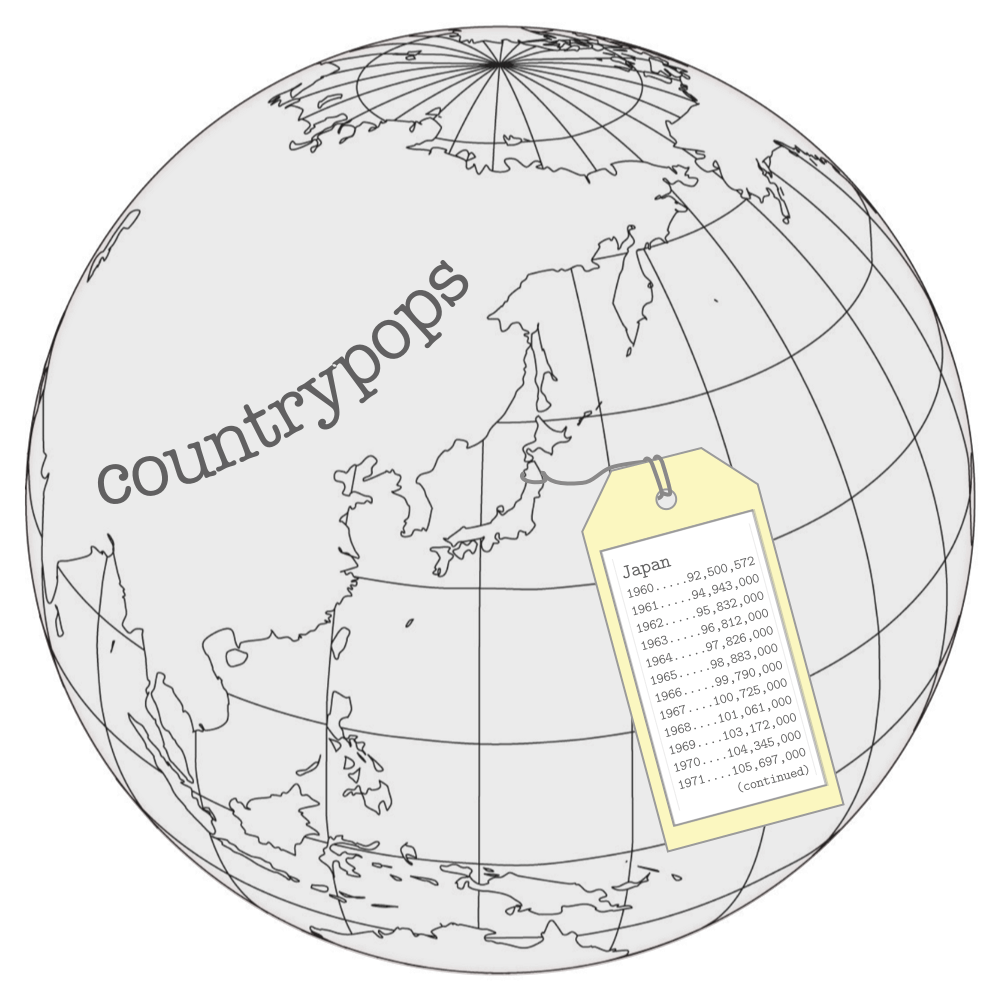 Each dataset is stored as a tibble, ranging from very small (like exibble, an example tibble of 8 rows) to quite large in size (e.g., at nearly 50,000 rows: pizzaplace). Larger datasets are typically impractical as gt output tables but they provide opportunities for demonstrating preprocessing using tidyverse tools like dplyr and tidyr (upstream of gt’s gt() entry point).

In many gt workflows, there will often be prep work like this where the creation of the input table and any salient information (e.g., metadata for footnotes) will be done alongside the preparation of the display table.

In the next few examples, we’ll show how tables can be created with each of these datasets. Each example will be preceded with a set of requirements that serve as a design brief. This planning stage can be very useful in your own work for the purpose of organization. The hope is that this collection of simple examples will inspire the creation of much more interesting display tables with gt.

This dataset provides the total populations of 215 countries on a yearly basis, from 1960 to 2017. The source data comes from the World Bank, where it has been cleaned and tidied up for inclusion into this package. Each row contains a population value for a country in a given year, where NA values for population indicate that the country did not exist in that particular year.

The countrypops dataset is a tibble with 12,470 rows and 5 variables. Here are explanations for each of the variables:

The table that we’ll create from countrypops will meet these requirements:

The solar zenith angle is one measure of the solar position. It can be thought of as ‘height’ of the sun in relation to an observer. A solar zenith angle of 0° indicates that the sun is directly overhead (a different solar angle, the solar altitude angle, is 90° in this instance). With the sun at the horizontal (e.g., during sunrise/sunset) we observe the solar zenith angle to be around 90° (there is the matter of atmospheric refraction). During nighttime, solar zenith angles in the range of 90–180 are possible (again, depending on the location of the observer).

The sza dataset has calculated values for the solar zenith angles every 30 minutes from 04:00 to 12:00 (true solar time). Temporally, these calculations are for the 1st of every month of the year. Spatially, the observer is located at somewhere along latitudes 20°N, 30°N, 40°N, and 50°N (because we are using true solar time, the longitude is unimportant). This is quite an extensive topic, and more information can be found by using ?sza in the R console or by visiting this page.

The sza dataset is a tibble with 816 rows and 4 variables. Here are explanations for each of the variables:

The table that we’ll create from sza will meet these requirements:

The gtcars dataset takes off where mtcars left off. It contains 47 cars from the 2014-2017 model years. Many of the gtcars vehicles are grand tourers. Indeed, many of these provide the ability to cross an entire continent at speed and in comfort yet, when it’s called for, they will allow you to experience driving thrills. The chassis and suspension are in most cases top-notch and supply superb handling and roadholding on all routes one would conceivably encounter during the grand touring experience. The two plus two (2 + 2) seating configuration is smartly designed to deliver comfort for a driver and passenger, adequate space for luggage, and have room to spare.

The gtcars dataset is a tibble with 47 rows and 15 variables. Here are explanations for each of the variables:

The table that we’ll create from gtcars will meet these requirements:

The S&P 500 is a capitalization-weighted index of about 500 leading companies (where bigger companies have more influence within the index) that have common stock listed in either the NYSE or NASDAQ markets. The companies chosen are intended to provide representation of the U.S. economy. This index is a managed list (managed by S&P Dow Jones Indices LLC) with occasional changes of the constituent companies based on their performance and changes in the economy.

The table that we’ll create from sp500 will meet these requirements:

The pizzaplace dataset is unusual to say the least. It brings up more questions than answers. Why is it that the ‘The Greek’ pizza (the_greek) comes in XL and XXL sizes whilst (almost) all the other pizzas adhere to the S-M-L paradigm? Why is the ‘Brie Carre’ pizza (brie_carre) only small? Also, is any of this real (?), and, what is the nature of reality? (All of these questions are quite complicated… however, while I can doubt the existence of the material world, I cannot doubt the existence of myself as someone thinking about all the delicious pizzas on offer at pizzaplace.)

We have somehow obtained the 2015 sales from the pizzaplace, where each row is a pizza sold. There are 32 different types of pizza in 4 different categories: classic, chicken, supreme, and veggie. It was a great year of sales, personal problems notwithstanding. A kitchen fire in late September did not help with the morale situation. Nevertheless, $817,860 in sales for the year! That was indeed something to be cheerful about.

Let’s learn more about how this fascinating dataset is structured:

Let’s make a reporting table from the pizzaplace dataset with these requirements:

The example tibble that’s useful for gt is called exibble. It’s 8 rows, has clear ordering of data, and the columns contain data that can be tested with the various gt formatter functions (fmt*()). Here is a table describing the columns of exibble:

Let’s test as many formatter functions as possible with exibble while also using row labels and row groups (furnished by the row and group columns). We’ll format num to display numbers with 2 decimal places. The dates in date will be formatted with date_style 6 (the m_day_year style, use info_date_style() to learn about all of them). The 24-h time values in time will use time_style 4 (hm_p, more info at info_time_style()). Datetimes as in datetime column can be formatted with the fmt_datetime() function (which uses the date_style and time_style arguments). The column currency will be formatted as a currency with fmt_currency and we’ll consider these values to be euros (currency = "EUR").